In case you haven’t heard, grocery prices are expected to jump this year, due to several factors. Of course, there’s the drought in California, which I assumed would be the biggest factor…

When I went to do some research for this post however, I found out that there’s also a cattle shortage and a hog virus, which leads to higher prices for chicken because who wants to eat overpriced beef and pork?  Apparently, we’re also sending lots of our milk over to Asia, so that’s affecting the price of our milk, and dry weather in Southeast Asia is driving up the price of palm oil, which affects every snack food under the sun.  The worst thing, though, is that there’s a drought in Brazil, which is driving up sugar, oranges, and worst of all – coffee prices.  That’s the last straw.

Honestly.  When in the history of your food-shopping career, have you ever seen your grocery bill go down?  Just like college tuition, there’s always some reason for the increase, so we have to suck it up and shell it out.  There are a few secrets though – things food manufacturers don’t really want you to know, but some of these tips, and I promise you’ll cut your grocery bill – and get healthier along the way. 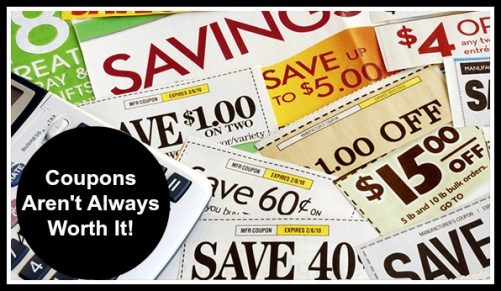 1.  Don’t fall into the coupon trap.  Have you ever noticed that the products that have coupons are almost always processed, packaged, unhealthy, and the most expensive?  Don’t buy something just because you have a coupon.  You can do much better if you buy generic instead of the brand names, and skip most of the snack and convenience foods all together.  Which brings me to tip #2… 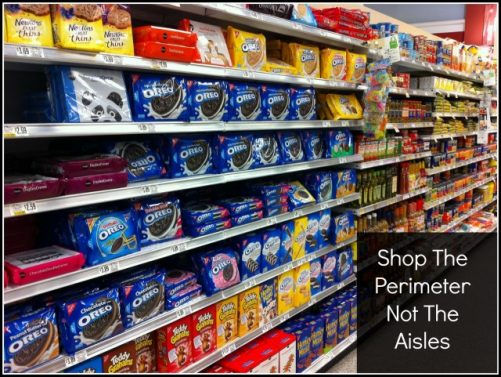 2.  Shop the perimeter of the store.  This is the golden rule of both healthier eating, and price slashing.  Wait!  You’re thinking, “Isn’t that where all the fresh produce, meat, and dairy are – all the things that are going up?” Yes, BUT the price of those whole items is still a lot less than all of the packaged foods within the aisles.  Remember that frozen dinners are made with meat and vegetables, and mac and cheese is made with milk, and Oreos and Cheez Its are made with those tropical oils.  That’s where the money is.  Make it yourself and you’ll save a ton. 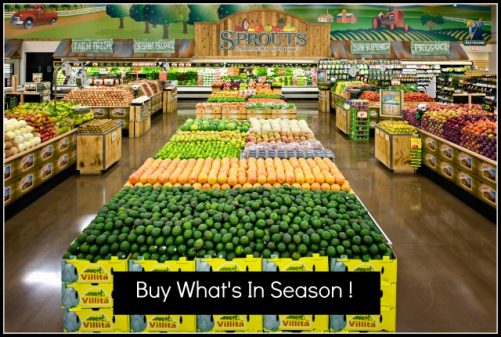 3.  Buy produce (and fish) that’s in season.  That will soon be a lot easier since we’re entering the spring and summer growing season.  But remember this rule in the winter.  The thought of fresh strawberries and tomatoes might sound great in January, but you’ll pay dearly, and they won’t even taste good because they’re out of season in our part of the world.  For produce (or any products) that’s out of season, stick to frozen or canned if you must have it, or just buy what’s in season. 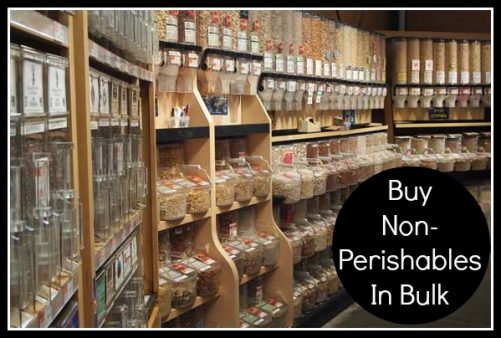 4.  Buying the largest size package, or packaging things always saves money, as long as the food won’t spoil, so go for grains and cereals in bulk.  Grains like quinoa, farro, wheat berries and many others take the same amount of time to cook whether you make one serving or ten, so skip the small packages, and buy and cook these in bulk, and freeze any leftovers for another night.  Buy large packages of grains, oats and cereal and store them in airtight containers.  They’ll stay fresh for a very long time. 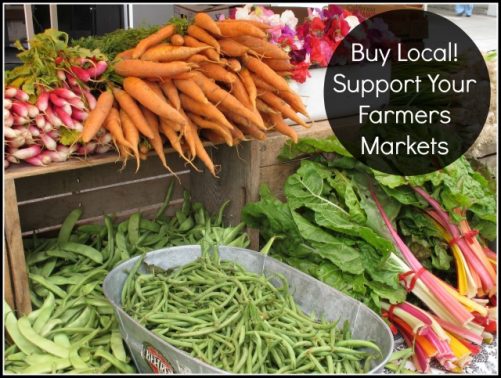 5.  In the summer (or if you’re lucky to live in a warm climate), shop at local farmers markets or join a CSA.  Much of the price of produce at the grocery store is from packaging and shipping.  While sometimes that’s unavoidable (like for those of us who have only 3 good local growing months), try to support your local farmers and you’ll not only eat fresher and healthier, but you’ll also have a connection to where you food comes from, and you’ll save money on fancy packaging and cross country shipping.

Sometimes I don’t get to use all of my farmers market produce up within the week, and I’m always amazed at how much longer my farmer’s market food lasts.  Proof that it really is as fresh as it gets. Take advantage of lower prices and fresher produce in the summer and learn how to can, pickle and freeze extra fruits and vegetables.  You’ll be so happy you did it when winter rolls around and you have homemade pasta sauce, pickled vegetables, and frozen peaches.

Do you have any grocery money saving tips to share?

The post 5 Ways to Slash Your Grocery Bill appeared first on Craving Something Healthy.