How about some fun finger food! Avocado, black beans, and a punch of Mexican flavors baked up in an egg roll.

Hello, Meatless Monday, Taco Tuesday or Superbowl Sunday – here’s a twist on Mexican fare that everyone will love for any or all of the above mentioned days.  All of your favorite Mexican flavors (and guacamole ingredients) wrapped up all nice and snug in a fun to eat egg roll wrapper that’s baked instead of fried.  Can you say Olé!?   I mean, why should Chinese food have all the fun?

OK so, I did recently see this avocado egg roll idea making the rounds on Facebook.  And apparently The Cheesecake Factory has a version on their menu (is there anything they don’t have?), so the concept isn’t new, but this version is just a little bit healthier, and because they have a little something from each food group, I might even say they’re good-for-you.  These Baked Avocado Egg Rolls have a hearty dose of black beans for protein, chopped kale for some extra veggies, and of course, they’re brushed with some olive oil and baked instead of deep-fried.  I guess it works, because they were gone in a flash. 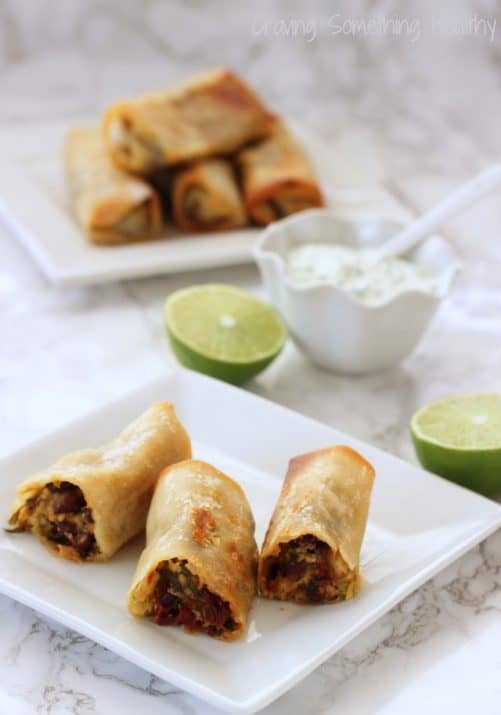 I served these with a lime-cilantro crema, because it cools the chipotle heat, but I think salsa would also make a great dipping option.

[bctt tweet=”#SuperBowlSunday is right around the corner. How about including Baked Avocado Egg Rolls on your menu? #HealthySnacks”] 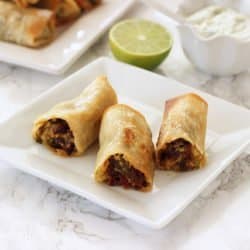 Be careful to not overfill the wrappers, or the filling will leak out while the egg rolls bake.
Did you make this recipe?Tag me @CravingSomethingHealthy!

What’s the most unusual thing you’ve ever eaten in an egg roll wrapper?