Nutritionists and foodies always talk about “eating seasonal” foods, especially when it comes to fruits and vegetables.   The funny thing about that is that pretty much anything we could want is always in season somewhere, so most foods are available year round. Some things might be more expensive at certain times of the year, but the quality is usually not all that bad. Except for most tomatoes. And rhubarb.

Maybe it’s because I only look for it in the spring, but I’m thinking rhubarb might be a bit of an exception. I see tons of it in April, but not really any other time of the year. I love a strawberry or blueberry -rhubarb pie or crisp, because it just screams “get lost winter – spring is coming through!” One time I thought I bought it at a farmers market in the summer, and I could hardly contain myself. “Rhubarb – in the middle of the summer!!” Then as I was trimming away the leaves I realized what I actually bought was Swiss Chard. Duh. 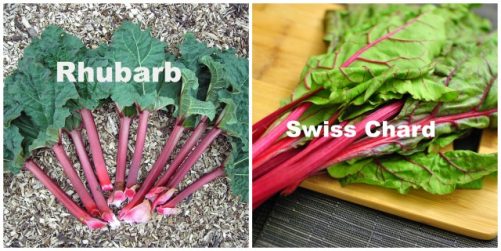 Can you see why I was confused??

So right now, before it’s gone for another year, I feel like I need to get my fill of this tangy, sour tasting non-fruit. Rhubarb is actually a vegetable, and a member of the buckwheat family. A cup full has a mere 26 calories, virtually no fat, only 6 grams of carbs, and a boatload of potassium, calcium and vitamin C. Unfortunately, because it’s so sour, I usually add a fair amount of sugar, and let’s not even discuss the nutritional profile of the piecrust that it gets added to…

This recipe isn’t exactly low calorie either, but it’s extremely delicious. Roasting wild blueberries with rhubarb concentrates their flavors and sweetness, and that makes for a really rich fruit swirl though the cheesecake flavored ice cream.  Did you get an ice cream maker

yet?  You’ll need it for this recipe! 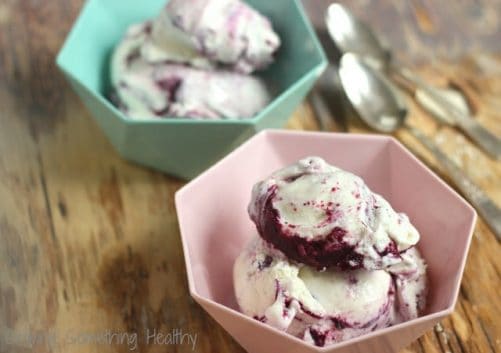 Make sure you use frozen wild blueberries – they’re higher in antioxidants, and have a much better flavor than the larger ones you find in the fresh produce department. You’ll probably have more fruit mixture than you need for the ice cream.  Save the extra to spoon over the top.  Or eat it like jam 🙂 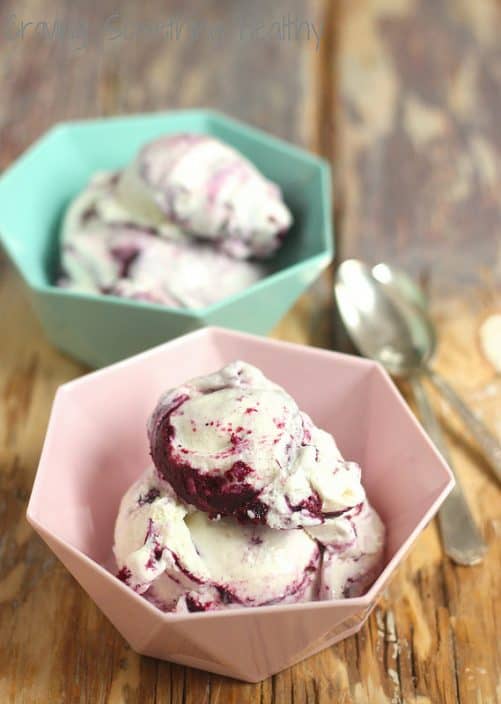 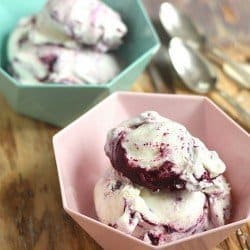 The recipe for the ice cream base was adapted from Jeni's Spendid Ice Creams at Home.
Did you make this recipe?Tag me @CravingSomethingHealthy!