This post was sponsored by Dominex, the Eggplant People. I received free products from them, but I was not compensated for my time. As always, all opinions are my own.

Holy. Meatless. Monday. Let’s toss aside the quinoa and kale just for a week, and take a quick trip to Italy for one of the all-time most wonderful and original Meatless Monday dishes – Eggplant Parmigianino. Yep – I’m going there. And you can come too.

I rarely make Eggplant Parmesan (or Parmigianino, as they say in Italy) just because it’s so time consuming. All that slicing, and salting the eggplant to remove the bitterness and water. Then there’s the egg dipping and breading and the frying or baking. And that’s before you even get to the sauce-making part of the recipe. Waaay too much work, but I will be your BFF if you ever want to make it for me 🙂

So let’s just say I was a little bit excited when the folks at target=”_blank” Dominex AKA the “Eggplant People” offered me the chance to test out their products. They make a line of eggplant products, including the cutlets, which I used in this recipe, eggplant meatballs, eggplant fries, and eggplant parm bites. The cutlets are low in fat (only 2 grams), only 100 calories per serving, vegan, AND – they promise to be ready to eat in just 2 minutes. Sounds too good to be true, right? How good could they be? 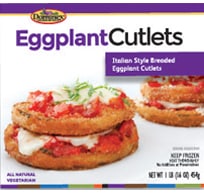 Really REALLY good- I’ve gotta say, I’ll be buying these again, because they were every bit as good as home made, and they really were ready in 2 minutes. No salting, breading, baking. Just heat the frozen cutlets and dig in. 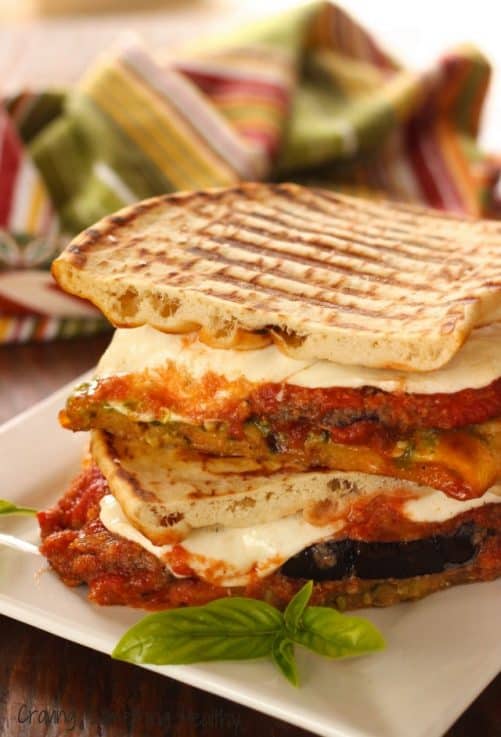 I gave them a quick dip in my fresh tomato garlic sauce, nestled them on slices of naan bread, and layered them with a smear of pesto, a slice of fresh mozzarella, and then it was off to the Panini press.

This is a definite knife and fork and several napkins kind of a Panini. The very best kind. Ciao! 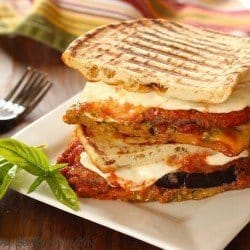 Did you know panini is the plural form of panino?