Is caffeine part of your Breakfast of Champions?  It is for me – but is that necessarily a bad thing?

In honor of Caffeine Awareness Month, it’s Caffeine Confession Time (and just an FYI I’m writing this as I sip my iced coffee):

Sometimes I just stand in front of the coffee aisle so I can breathe in the aroma.

I’ve tried to make a body scrub out of the millions of gallons of used coffee grounds that I create.  It made a huge mess on my skin, and in my shower.

When I go on vacation, I pack a huge Ziploc bag of coffee in my suitcase.  Just in case there isn’t a Starbucks within a stone’s throw on my hotel room.

I can’t start my day without a large cup of the stuff!

I know I’m not alone.  Millions (probably billions) of us start the day with a good strong cup of coffee.  Yes, I do love the aroma, and oh, those first few sips…  But let’s admit it, it’s the caffeine we crave, and whether we know it or not, we’re addicted to it.  So in honor of Caffeine Awareness Month, here are a few facts about caffeine.  Don’t worry – you won’t have to quit! 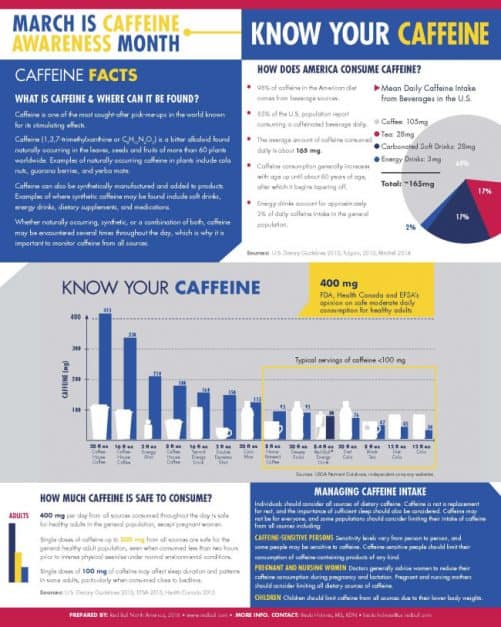 Do you buy it or make it yourself?  Drink up and eat well!