I remember the first time I ever heard of a fish taco.  My parents and youngest brother moved from Chicago to San Diego, in the late 80s, and the first time we came to visit, they raved about the fish tacos at this little placed called Rubios.  Supposedly the owner brought the recipe to southern California from Mexico.  I had recently moved from Chicago to Boston, and couldn’t even fathom the thought of fish on a taco.

To me, tacos were still something of a meal that came out of a yellow box.  You just added ground beef, shredded cheese, some lettuce and voila!  Amazing how far our taste buds have come in the past 25 years…

Today, Rubios is a major west coast chain, and the fish taco has caught on all over the place – even in Boston.   No Rubios here yet, but we have Dorado Taco in Brookline, which serves them just like in Mexico and southern California.  Fish Tacos are a nice twist on traditional beef, chicken, or bean tacos.  I think they’re super easy to make, and lighter and healthier tasting.  You can serve them with salsa or pico de gallo, but I really love the traditional cabbage slaw with Mexican Crema, a cool, creamy sauce.  I’ve been making this recipe, adapted from the Culinary Institute of America, for a while.  It’s easy to prepare on the grill or stovetop, but I prefer to use my Panini Press

, because the fish doesn’t fall through the grill, cleanup is easy, and I get those nice grill marks on my tortillas. 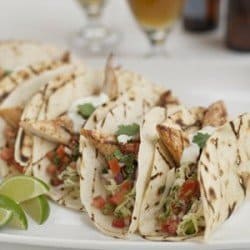 Did you try this recipe?Tag @CravingSomethingHealthy and show me!!

Previous Post: « Salt, Sugar and Fat – Why We Can’t Stop Eating It
Next Post: Organic, Natural and Everything Else: Decoding the Food Labels »