When it’s too early for good corn on the cob, this recipe satisfies your craving for street corn.

If there is one thing that just screams summer is here, it’s a beautiful ear of grilled corn schmeared with real, sweet butter, and topped off with a sprinkle of salt.  Mmmm.  Can you taste it?  So please, can someone tell me why the grocery stores are desperately trying to ruin that summer thought by selling what is clearly WAY too early corn on the cob packaged in little styrofoam trays that are wrapped in plastic?

I totally realize that it’s summer somewhere, and in this day and age we can get any produce we want when we want it, but – corn on the cob just doesn’t work that way.  If you’ve ever lived where real corn is grown (i.e. the midwest) then you know all about “knee high by July”.  That means the really good stuff doesn’t show up until August. You can’t rush it

Because all of that way-to-early corn has given me a craving, and I know what’s in the stores right now is tough and starchy, today’s recipe works perfectly with frozen sweet corn, OR the real stuff if you’re reading this in the summer.  This recipe was inspired by a dish at one of my fave local fast casual restaurants – Flower Child.  I’ve actually never tried their sweet corn and quinoa with Greek yogurt, because I’m usually busy devouring my flying avocado wrap.  But I’ve heard from multiple sources that it’s the bomb.  I think my Mexican Street Corn version is also the bomb. 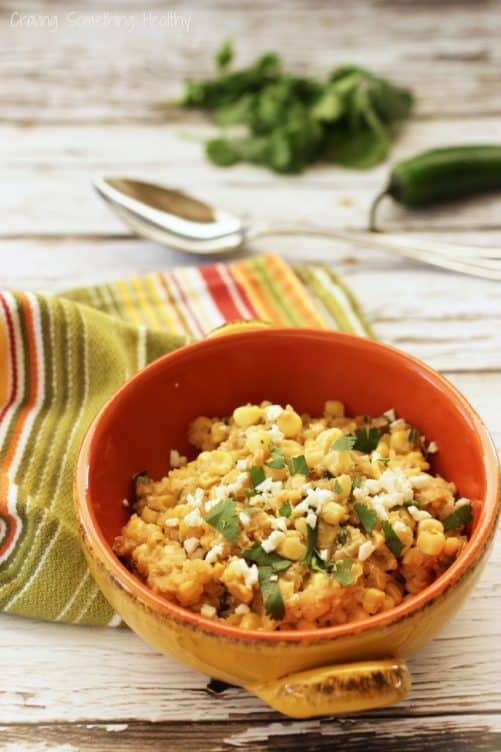 Even though this is made with frozen corn, you can still get that grilled, charred, street corn flavor from a hot saute pan.  Really.  And the beauty of this recipe is that you can make a huge batch and eat it for a few days.  Just try and do that with corn on the cob. 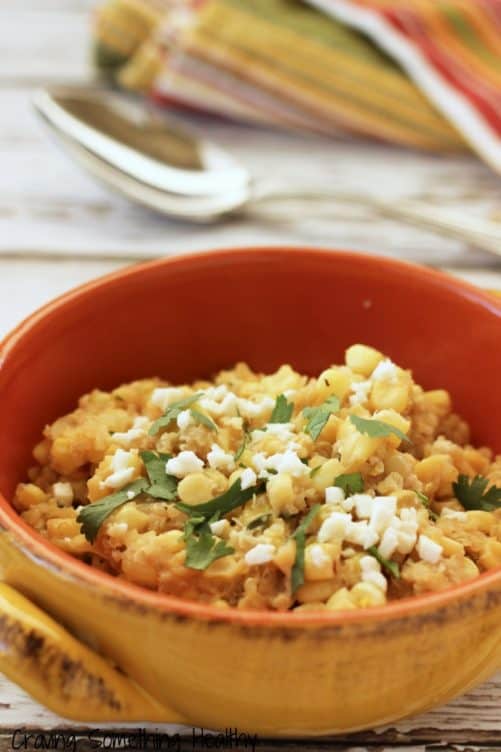 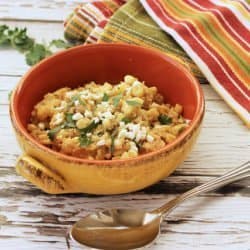 If using corn on the cob, grill 4-5 medium ears of husked corn, and let rest until cool enough to handle. Cut the kernels from the cob to use in the recipe.
Did you make this recipe?Tag me @CravingSomethingHealthy!

Have you been seeing corn at the grocery store?  Is it edible yet?