This super-simple shortcut version of chicken Pho is every bit as flavorful as the traditional Vietnamese noodle-y soup but so much easier.

It’s January and cold outside baby and that means soup. Today, it’s all about pho, or actually, a faux pho. That’s because I learned real, traditional pho involves homemade stock and hours of waiting. And sorry, but that’s just too much work for us coming off the holidays.

In case you don’t know pho, it’s a Vietnamese noodle and broth soup. It usually has chicken or beef, but you can also keep it vegan with tofu. However, you can’t skip the noodles or the flavorful broth.

There’s a very authentic pho place near me. It’s in a strip mall with a massive Asian supermarket, and lots of Asian specialty stores, so I do believe it’s legit.

I had a huge, steaming bowl of their Chicken Pho a few weeks ago. It was so very delicious, and as I always do when I eat something amazing, I tried to identify all of the flavors so I could make it at home. The crazy thing was, it was the simplest bowl of soup ever. Just a clear broth, rice noodles, a little bit of chicken, and a side of fresh cilantro, Thai basil, mint, chili peppers, and fresh lime juice to top it with.

The thing that makes pho completely different from any other type of chicken soup, I realized, is the broth.

It’s all in the broth

After lots of research and a quick read of The Pho Cookbook, I learned that pho broth features spices like star anise, coriander, ginger, cinnamon, and cardamom pods.

Well, that explains a lot. No wonder it tastes nothing like my mom’s chicken soup!

This version is every bit as good (I think) but it really is a Shortcut Chicken Pho. I think we could all agree there’s nothing wrong with shortcuts! I used a doctored (or spiced) up carton of chicken broth, shredded rotisserie chicken breast, sliced mushrooms, and a bag of shredded carrots. Yep, I’m lazy like that.

Whatever you do though, don’t skip the spices – especially the star anise and the coriander seeds. They totally make the broth shine.

Pho broth is clear, so I tied my spices up in a piece of cheesecloth. Once they infused the broth, I removed the bag of spices before serving.

I also opted for Chinese egg noodles in my version. Rice noodles are traditional. However, I prefer the texture of egg noodles. And, since my pho place offers either egg or rice noodles, I kinda felt like I got the green light from them. 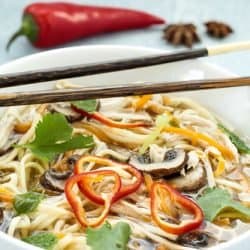 If you like your Pho spicier, add hot chili sauce or Sriracha.

Do you know how to pronounce Pho? Word is it’s “fuh“.