You probably don’t think about it when you reach for a pinch of pepper, or a teaspoon of cinnamon, but the spices in your cabinet were once rare and treasured for their medicinal properties.

Today, it’s mostly chefs and foodies who treasure spices as a secret ingredient or a delicious way to enhance a recipe without adding extra salt, sugar or fat.  However, it seems that ancient medicine may have had it right, as scientists are rediscovering the powers of some of our favorite spices.  Adding an extra pinch or teaspoon of most spices provides a healthy dose of disease fighting antioxidants, and a major boost to the immune system.

Stars like oregano, rosemary and turmeric usually steal the spotlight because of their high antioxidant levels, and cancer-fighting properties.  Both oregano and turmeric have been shown in lab studies to kill certain cancer cells, and rosemary can help to reduce the carcinogens that form on meat when it’s grilled.  But there are also a few “winter” spices that shouldn’t be overlooked because they too can enhance the immune system and maybe even help ease your way through cold and flu season.

While antioxidants may not prevent colds or flu, they will help to strengthen the immune system so you recover more quickly.  Antioxidants are usually associated with foods like berries or leafy greens, but one spice in particular gives you a much bigger bang for the buck.

One–half teaspoon of clove has as much antioxidant power as a half cup of blueberries, and researchers in Spain have ranked this spice as the best natural antioxidant.  The spicy fragrance of clove complements winter fruits like apples, pears or pumpkin, and can be used along with cinnamon or nutmeg in oatmeal, muffins or sweet breads.

Ginger has been used throughout history to treat everything from nausea and motion sickness, to pain and inflammation, and it definitely has its place during cold and flu season.  A cup of spicy ginger tea will ease symptoms of colds, respiratory infections, and fever by relieving nasal congestion and stimulating circulation, which helps you feel warmer.  As a bonus, its active compound, gingerol, has antimicrobial properties, to help nip any bacteria and viruses in the bud.  Ginger is traditionally used in Asian cooking and marinades, but dried powdered ginger also adds a spicy zing to fruit salads and roasted carrots or sweet potatoes, as well as anything with pumpkin.

For stomach viruses or indigestion, peppermint may do the trick. Rather than used as a dried spice, peppermint is brewed as a tea, or taken as an enteric-coated capsule.  Because it helps to relax muscles in the stomach, it can soothe an upset stomach or aid digestion. Peppermint’s active compound is menthol oil, which is also an effective decongestant and expectorant, and helpful for colds and cough.

Finally, cinnamon is rich with antioxidants, and its active compound cinnamaldehyde has antimicrobial properties that can fight bacteria in the mouth.  Cinnamon has also been making the news recently for its benefits for blood sugar.  A teaspoon added to your morning oatmeal may very likely help to prevent a spike in after breakfast blood sugar, but don’t limit it to breakfast, try a sprinkle on your yogurt, fruit salad, or even in your smoothie.

This recipe for Spiced Candied Ginger is full of winter wellness, and it hits the spot for a spicy-sweet treat.  Or try a few pieces in your tea.  I highly recommend saving the ginger-sugar liquid for pear-ginger martinis 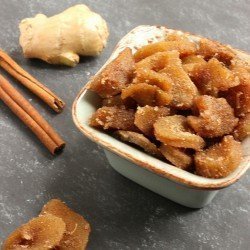 Adapted from America’s Test Kitchen
Did you make this recipe?Tag me @CravingSomethingHealthy!

Do you use a lot of spices in cooking?  What’s your favorite spice combo?