I might be slightly biased, but I think these Refrigerator Zucchini Pickles are the best pickles ever. They’re like sweet pickles or bread and butter pickles with a kick— a perfect blend of sweet, savory, crispy, and crunchy. Plus, they don’t require heat processing or canning, so you can whip them up in 30 minutes and keep them in the refrigerator for weeks.

Zucchini pickles are one of my favorite ways to use up all of that summer zucchini. And even though these are sweet (and spicy) zucchini pickles, trust me, they’re a lot lower in carbs than our other all-time favorite zucchini recipe — zucchini bread!

Does your mouth water when you pass by the pickle section in the grocery store? Just wondering, because mine does. Every time.  And I’ve always wondered if the same thing happens to anyone else.

One of these days I’m going to get over my fear of canning vegetables and getting (or giving someone else) botulism. I’d really love to learn how to make heat-processed pickles or fermented pickles that can sit in the pantry until I eat them one day in the middle of winter.

For right now though, I’m sticking to refrigerator pickles. Unlike fermented pickles that take weeks of sitting on your counter to develop their flavor, refrigerator quick pickles really are unbelievably fast to make. Of course, their flavor gets better if they swim around for a few days in their pickle brine, but honestly, you can eat this quick pickle recipe in about an hour.

Refrigerator vs Canned vs Fermented Pickles

Although they taste similar, there are some differences between refrigerator pickles, canned or heat-processed pickles, and traditionally fermented pickles.

Canned pickles or any other vegetables are heat-processed, which means you have to heat the closed jars in a water bath for a certain amount of time. That ensures any bacteria or microorganisms are destroyed and the jars are sealed for longer shelf storage. With canning, it’s important to have the right amount of acid in your brine to prevent the growth of botulism spores. For low acid foods, you must use pressure canning.

Technically, you don’t have to heat process fermented pickles. They’re made with just salt, water, and herbs/spices. As they sit on your counter for a few weeks, they start to bubble and ferment. During the fermentation process, lactic acid forms, which prevents harmful bacteria from growing and gives fermented pickles their tangy, pickle flavor.

You must store refrigerator pickles in the refrigerator even before you open the jar, or they’ll spoil. They have a shorter unopened shelf life. Once opened, you should use them within a month but that’s true with any pickling method. But there are still some advantages of the quick refrigerator method:

In short, with refrigerator pickling, you can be far more creative with your recipes and less fussy about your pickling technique, and that’s more my style.

Since it’s that time of year when everyone has an abundance of zucchini, and friends and neighbors are begging you to take it off their hands, you have to try these zucchini pickles. They taste pretty much like regular pickles made from cucumbers. But I think they have a nice crisp texture and a little bit more crunch than homemade cucumber pickles

I adapted this delicious recipe from my Sweet and Spicy Zucchini Relish, which is also mouth-wateringly delicious, and perfect for sandwiches or veggie burgers. I was really feeling like sliced pickles though, and I thought some pickled thin-sliced onions would be a nice touch too. 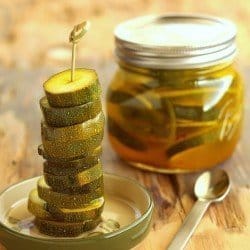 Instead of boiling the brine in a pot, use an 8-cup glass measuring cup and boil it in the microwave. The measuring cup is easier to pour out of.

Do you make your own pickles?  If you want to experiment a bit more, this is a good resource on Homemade Pickles and Relishes from the University of Wisconsin