I’m pretty good at tweaking recipes to make them lower in salt, sugar or fat, and I my holiday meals are no exception.  So it’s not that we ate lots of unhealthy food all weekend, but we did eat lots more food in general.  What’s Thanksgiving weekend without lots of leftovers, right?  Well, we just polished off the last of the turkey and stuffing last night, and I have never been so happy to see Meatless Monday.  I need some clean eating!

In case you aren’t familiar, here’s a bit of history.  Meatless Monday is not the product of a big chain natural foods store, or PETA.  It was originally started way back during World War I, as a way of voluntarily rationing food, and reducing consumption of key staples to help the war effort. The United States Food Administration coined the terms “Meatless Monday and “Wheatless Wednesday” to remind Americans to reduce intake of those products.

Meatless Monday was resurrected in 2003, as a national health awareness program, and has since gone global, with the focus on health benefits of vegetarian eating, as well as the reduced environmental impact of skipping meat based meals at least once per week.  There are so many benefits of eating more of a plant-based diet, but just between you and me, one of the things I love best is that I get to be a little more creative in the kitchen.  No more boring meat, potato and vegetable meals here!  For me, it means an explosion of fresh flavors and textures and new ways to combine vegetables, herbs, seasonings, and grains.  So are you onboard the Meatless Monday movement yet?  If not, here comes the bandwagon, jump on! 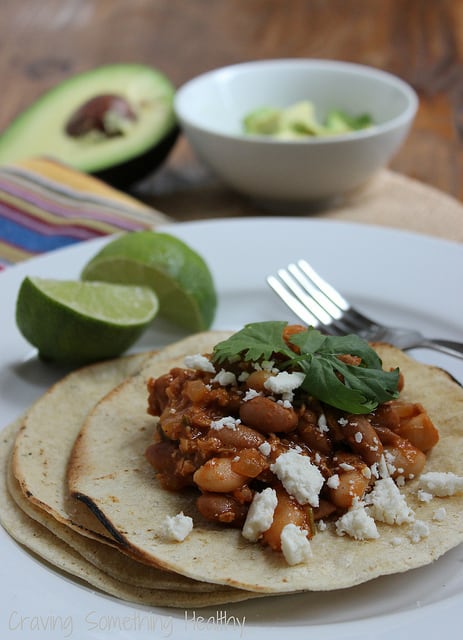 Frijoles Rancheros (Mexican ranch style beans) is usually made with ham or chorizo sausage.  Look for the vegan chorizo at Trader Joe’s or the natural foods section of your grocery store. 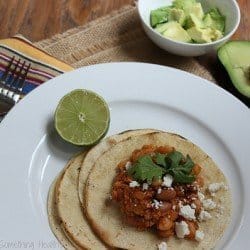 Nutrition information does not include added cheese, avocado, or tortillas.
Did you make this recipe?Tag me @CravingSomethingHealthy!