So happy it’s January, because it’s the longest, coldest, darkest, most never ending month of the year, only to be followed by February which is … Oh yeah, more of the same.  There is nothing so wonderful as typing on my computer while wearing fingerless gloves!  Said no one EVER.  Thank heavens for whomever (or is it whoever) invented soup, because it’s the one thing that keeps me warm all winter long.  This one’s my/our very favorite soup of all time, so I’m excited to share it with you.

I’ve been making this recipe forever.  It’s adapted from somewhere, but I honestly forget where.  I love the addition of cilantro and red pepper, kind of a non-spicy southwestern twist.  Save time by using a rotisserie chicken if you like, and peeled and cut squash.  And make sure you add the red pepper, scallions and cilantro at the very end – it’s so good when you get that little bit of crunch!

Not to be bossy, but...One more important thing… I use half and half instead of heavy cream, but you can’t boil half and half (it curdles).  You have to add it at the very end after the soup is hot. So if you want half of this soup for leftovers, put half into a container, before you add the half and half and then add it after you heat your portion.  Hope that makes sense – too many halves!  You could always use heavy cream and not worry about this step, but it has lots more fat, and I don’t think this soup needs it. 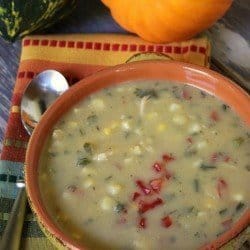 Do you live where it’s cold and dark forever?  How do you deal with it? 🙂  Stay warm and …